Tokyo Ghoul season 3, better known as Tokyo Ghoul :re wrapped up this past June. Thankfully, most of our prayers were answered. For those of you who don’t know, the :Re source material was written by Sui Ishida and is one of the premiere masterpieces in the manga world. Immense character development, plot twists, and action are only a few of the well-tailored elements that the franchise has to offer. As a fan, my only request was that the production team stayed true to the source material…and they did. Seasons 3 renewed my hope in the franchise after a disappointing season 2. Despite being very aesthetically appealing, the plot in the previous season deviated so far from the original story that longtime fans wondered if there was anyway anime adaptations could continue for the horror manga. Nonetheless, the first 58 chapters of :Re came correct.

Sticking to the source material is hands down my favorite aspect of the anime. Yes, there were very small things left out, most importantly what happened during the final moments of the season. It was left out that Investigator Furuta was the one who ordered the raid of corpses from the CCG, as well as some other minor details. I was a big fan of how the animation brought panels from the manga to life. For example, Haise’s run-in with Touka in the café,

Big Madam eating Urie, Hinami protecting a battered Haise, the birth of Black Reaper Kaneki, Shirazu’s death (heartbreaking), and Tsukiyama being protected by Touka and Yomo. All these events were literally copied and pasted from the manga and I loved it. Rather than changing key details, the anime just left out some dialogue here and there, which I can deal with.

The plot progression utilized the same schematic from the past seasons. The 12 episodes were divided into two arcs, that both concluded with major conflicts (both external and internal) for our tragic hero. Each finale peaks when Haise gives in to the “Kaneki” in him to protect others.

This season we saw Kaneki’s real strength shine as the “Black Reaper.” He beat Tsukiyama, went toe to toe with an owl-fied Kanae, and almost dispatched The One Eye herself, Takatsuki. Whenever Haise did tap into his past and use Kaneki’s strength, we were reminded that the Eye Patch (Kaneki’s old alias) was one of the strongest ghouls in the Tokyo Ghoul universe. Which can lead us to believe that a combination of Kaneki’s “sleep” and Haise’s “dream” is what gives birth to this new and improved Kaneki. We essentially get the result of Kaneki’s latent ability mixed with Haise’s training as a Ghoul Investigator under Kisho Arima. With his two halves working as one, and Kaneki at the driver seat, we get an almost OP version of our protagonist. That being said he wakes up pissed and ready to f**k shit up! I also love the slick foreshadowing in the season finale when Takatsuki asked Kaneki, “Who is stronger, you or Kisho Arima?” right before they get to scrappin’.

There were other instances where Haise is compared to Arima in the season, but a seed has been planted for arguably the best fight in the Tokyo Ghoul series. We only have to wait until OCTOBER to see if Studio Pierrot can keep giving life to this amazing story.

The key visual for the next season shows a decayed Tokyo which is a major foreshadow to the manga’s final arc. So will we get a sped up 12 episodes?

By a lot of people’s count, they covered 58 or so chapters in 12 episodes, to get to the arc depicted in the shot to the right its about 80 plus chapters to get there. So fingers crossed for an equally as hype season to come. For more TG news on the upcoming seasons, check out this article from INQUISITR.

A theme I genuinely appreciated was Haise’s role as a background character for a majority of the first half of the season. Instead of focusing on Haise, the big picture was a more in-depth look at the CCG and the Quinx squad members. Urie and the other Quinx were flawlessly brought to life as well. “When they included Urie’s internal monologue, I knew this season was for real…” is what one of my close friends noted. I also thought Investigator Urie’s internal dialogues, as well as Investigator Saiko’s mannerisms, were spot on. I admit I also got too attached to the Rose ghouls – c’mon Kanae and MatsuBAE took center stage in the Rose arc. Both went out as gangsta as one can go. In addition, Investigator Shirazu’s last moments were so excruciating heartbreaking. Seeing his comrades above him, his final moments of deafness, and even Urie’s bargaining all made his farewell so impactful. Had the story not taken so much time to develop these characters, his death probably wouldn’t have made me shed a thug tear like it did.

The previous two seasons of the show relied on bright and bold animation. Quinques and Kagunes were the focus of the animation, with hard strokes for the fights. In season 3, the production took a different turn, where everything looked and felt fluid and minimalistic. Did anyone else notice the look of the kagunes? They appeared to be rugged and weirdly organic. They actually looked like appendages and not pretty tails like the previous seasons. Also, who doesn’t like blurry 2D action? Another solid aspect from the animation are the subtle gradual changes as the season continued. Most notably, Haise’s gradual shift after episode 6. Every episode Haise’s hair grew longer and darker, slowly resembling Kaneki more and more.

Now, I am stanning very hard right now, but because I really enjoy this story I can also pinpoint a few shortcomings. Like I mentioned earlier, we missed some key dialogue towards the end of the season but who’s to say the next season won’t answer our questions? Now, I understand there is only so much that can be done in 12 episodes (at about 22 min a piece), but we still could have gotten more on the CCG. We could have had more exploration on the relationship between Haise and his “parents” – Special Investigator Arima and Senior Investigator Mado. Both of which took it upon themselves to raise Kaneki into Haise after he lost his memories. We also lacked background stories for Investigator Mutsuki (most notably him being born a female – yes a trans character! 👏🏽) and Investigator Saiko (her motivation to become a Quinx.) Lastly, was it too much to ask for a little more ass whooping between Crazy Takizawa and Haise in the mid-season fight? I get the main conflict was Haise’s internal struggle, but half the reason we watch anime is for the over-the-top and imaginative fight sequences right? We know that anime fights are so dope because we know damn well they couldn’t be done right in a live action setting. 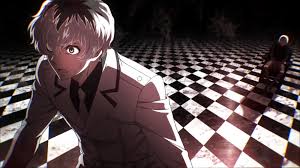 All in all, Season 3 delivered and the few readers who got excited at every episode, despite knowing what was coming next – I know you agree. Especially if you know what’s about to go down. For a spark notes spoiler preview of Season 4, check out Monsters & Critics.

The Talent a.k.a Maneki